Over the past two weeks, decision makers, researchers, scientists, activists, and civil society from around the globe gathered in Glasgow for the COP26, the 26th edition of the United Nations Climate Change Conference.

Earth Observation data from the Copernicus Services and Sentinel satellites provide a wealth of data about the state of the Earth’s environment and the changing climate.

With a direct link to the data infrastructure of the institutions behind the four Copernicus services focused on environmental data (marine, atmosphere, climate change and land), in combination with powerful virtual environments and processing tools, WEkEO has the potential to support scientists and researchers, entrepreneurs and innovators, as well as decisionmakers and public authorities, to better understand and address climate change and its impact

From the ocean to, to land, to the atmosphere, Earth Observation data provide crucial insights that can support decisionmakers and public authorities make informed decisions and take appropriate action to mitigate the impact of climate change.

The latest report from the IPCC, the UN’s Intergovernmental Panel on Climate Change, recognised the crucial role that Earth Observation data play in understanding climate change and monitoring its effects. The Copernicus programme, as the world’s largest Earth Observation data provider, is at the forefront of these efforts, with data from the Copernicus Services regularly used in IPCC reports.

That is why the Copernicus programme and its services were present at the COP26, sharing with delegates and attendees, how Earth Observation data can contribute.

For example, the Copernicus programmes is developing a constellation of satellites that will measure the concentrations of carbon dioxide and methane in the atmosphere to provide the first European CO2 Monitoring and Verification Support Capacity (CO2MVS) on anthropogenic emissions. This will allow scientists to quantify anthropogenic greenhouse gas emissions in support of the 2015 Paris Agreement. prefix: 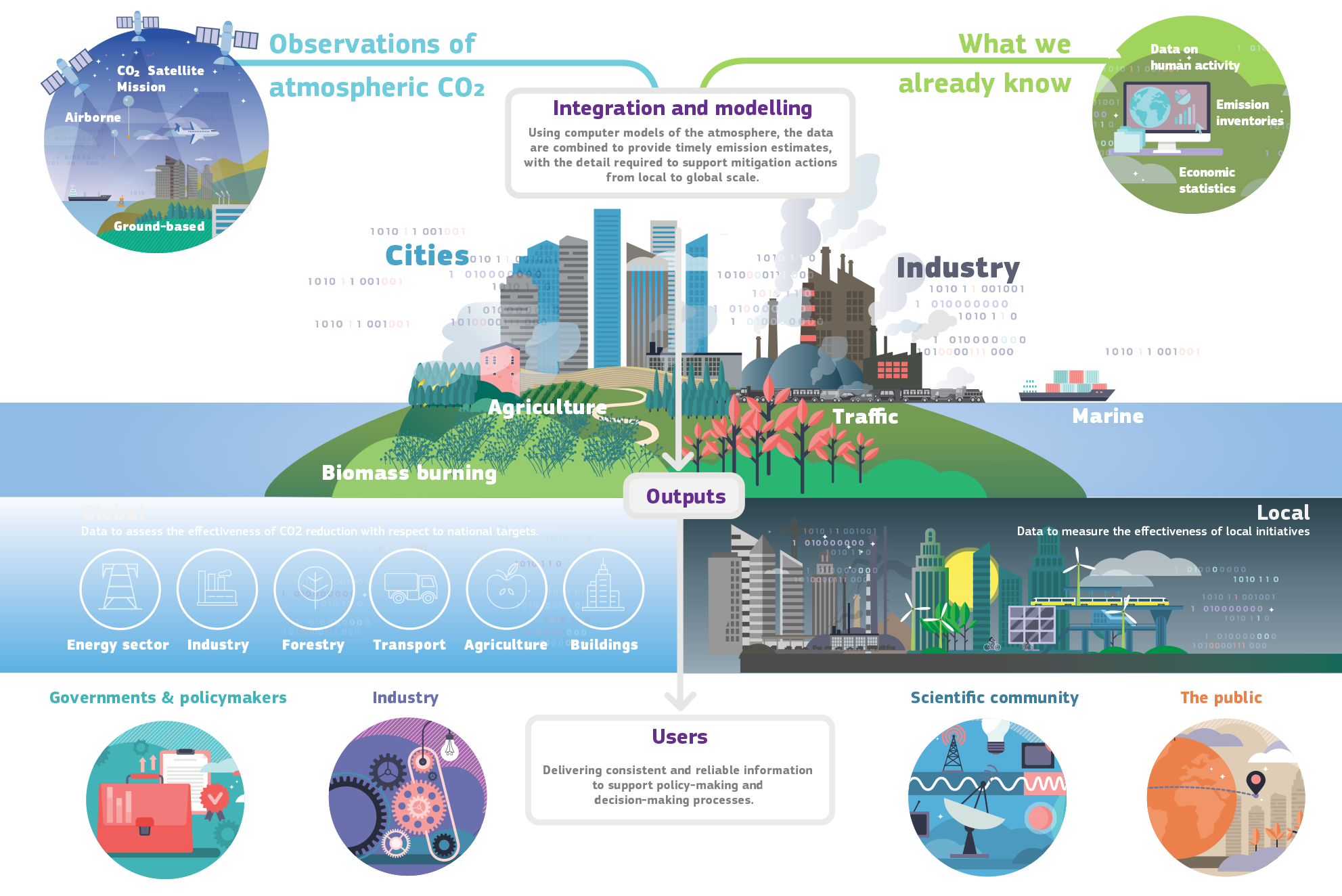 The Copernicus Climate Change Service and Copernicus Marine Service provide important data such as the Essential Climate Variables (variables that critically contribute to the characterization of the Earth’s climate), and the Ocean Monitoring Indicators (including Essential Ocean Variables that track the health of the ocean and changes linked to climate change) that help better understand how the climate is changing and the impact of these changes, to support mitigation and adaptation strategies. Variables include ocean heat content, sea level, ocean acidification, deoxygenation, and many more, all essential for understanding impacts of human activities and projecting them into the future. The recently launched Sentinel-6 Michael Feilich will extend the legacy of sea level measurement to 2030 and improve an impressive 60% of the Copernicus Marine observation and modelling products.

Datasets from these three Copernicus services, as well as the Sentinel satellites and the Copernicus Land Monitoring Service’s data can be accessed through the WEkEO platform.

What were the outcomes of COP26?

Originally planned for 2020 and postponed due to the ongoing COVID-19 crisis, COP26 was of particular importance as the 197 signatory countries had agreed to put forward more ambitious Nationally Determined Contributions (NDCs). NDCs are national plans setting out how much a given country will reduce their Greenhouse Gas emissions. The COP26 was focused around four goals: mitigation, adaptation, finance, and collaboration.

After two weeks, aside from countless events, meetings and discussions, the Parties reached a consensus on some key actions needed to address climate change, including:

More information on the outcomes of the COP26 can be found here and here.